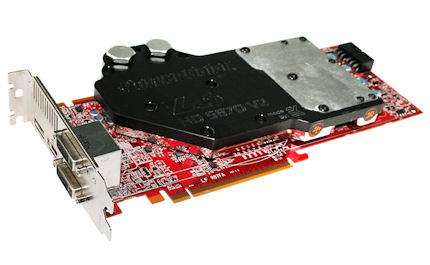 PowerColor has been providing for the water-cooling crowd with its LCS graphics cards for some time now. The range is about to get a little bigger, though, with the release of the handsomely-overclocked LCS HD5870 V2.

The company already offers a Radeon HD 5870 with a water-block, but this new revision increases the clock speed to an impressive 950MHz for the core. This compares to 875MHz for the older LCS version and 850MHz for stock models. Bizarrely, though, the 1GB GDDR5 seems to have had its speed decreased, dropping from 1250MHz (5,000MHz effective) on the original model to the stock-speed of 1,200MHz.

As for the cooling, PowerColor has once again teamed-up with EK Water Blocks to provide the parts. Other than the custom cooling block, the card is a fairly standard HD 5870, with the double-height back-plate offering two DVI, one HDMI and one DisplayPort output. The manufacturer also throws a copy of DiRT 2 in for good measure, which is an obvious addition. However, we would have liked to see a second game in such a high-end package