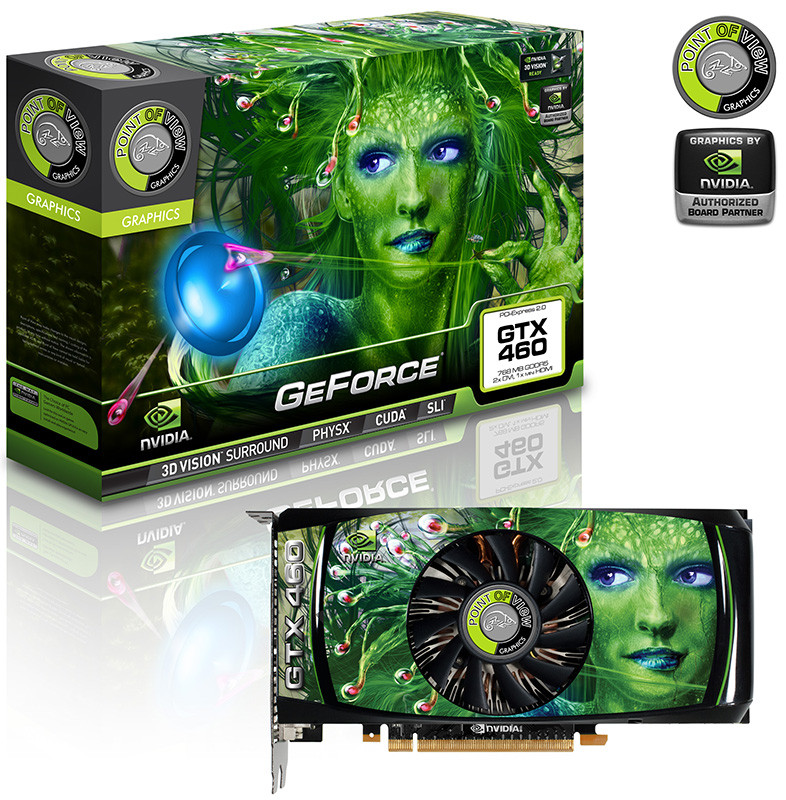 Point of View known for its range of NVIDIA based 3D Graphics cards, Netbooks and other PC products, announces today the launch of the new Point of View GTX 460. Get ready for the graphics card with the ultimate price versus performance ratio! The GeForce 400 series has proven to be an excellent choice for gamers worldwide. Excellent gaming performance and rendering features and strong multimedia functionalities through its supported DX11 and CUDA technologies.

The GeForce GTX 460 Series takes performance a giant step further with one of the best GPUs ever made. Whilst the standard GPU core runs on a moderate 650 MHz, speeds exceeding 800 MHz have been recorded in our OC research labs. The secret can be found in a very successful GPU production batch; creating a GPU that runs extremely cool.

Available will be two versions with respectively 768 MB and 1024 MB DDR5 graphics memory. Both cards feature the same amount of 336 shader processors which run on 1350 MHz. Also the availability of double Dual link DVI and mini HDMI connector are the same.

When gaming on the full high definition resolution of 1080p or 1920 x 1200, the ideal choice would be the 1024 MB version. If your LCD monitor runs on a lower resolution the 768MB is more than sufficient. And we are talking about ‘all settings high’! Great frame rates all max detail! If that’s not enough, there’s always the possibility to use two GTX460 cards in a monstrous SLI setup!

The out-of-the-box performance of a single GTX 460 is more than sufficient to run every game available on the market. Next-gen features and upgradability make this graphics card an excellent choice for those who are looking for a future proof purchase.

Without further delay, let’s have a look at the specs of the newest GeForce 400 sibling:

The GeForce GTX 460 is available now at leading online and in-store retailers throughout Europe. The previously announced game bundles will be also available with the GeForce GTX 460. Choose either Prince of Persia: The Forgotten Sands or Tom Clancy’s Splinter Cell Conviction to put your all-new graphics card to the test.